Mihai Dubovici, son of Teodor and Ana, was born on September 27, 1962 in the Village of Remeti, Jud. Maramures, Romania. He completed grammar and middle school in his village and after graduating in 1976 entered High School (Liceul Mecanic Nr.2) in the city of Sighetu Marmatiei graduating in 1981. From 1981 to 1985 Mihai spent time with his parents helping them on the farm. At that time it was very difficult to enter any kind of a University especially if you were from a village since the Communist policy held that if you were from a village, you should work on the farm, while those students who lived in the cities should be the ones going for further studies.

In the spring of 1985 Mihai decided to leave his native country, even though he had 3 brothers, 4 sisters and parents there. On May 8th, 1985 along with his 4 cousins he decided to defect. After a 24-hour trip, they ended up in the former Yugoslavia, where they spent 15 days in jail for illegally crossing the border. Following the arrest, they were granted political asylum, and on November 2, 1985 Mihai entered the United States of America.

For the first two months, Mihai worked in a factory that manufactured commercial air conditioners. In January of 1986, he decided to enter Saint Basil College Seminary, in Stamford, CT where in the spring of 1990 he earned a BA, with major in philosophy. In the fall of 1990 Bishop Basil H Losten sent him to Rome, Italy to study theology at Saint Thomas Aquinas University (Angelicum). There Mihai earned a S.T.B. degree with a major in theology graduating in 1993.

On August 1st, 1993 Mihai Dubovici was ordained as deacon and was assigned to Saint Josaphat Ukrainian Catholic Church in Rochester, NY. On January 17th, 1994 he was ordained as priest at Saint Basil College Seminary Chapel in Stamford, CT.

Following his priestly ordination Rev. Dubovici was assigned as Assistant Pastor to St. Josaphat Church in Rochester until July 31st, 1995. He taught religion at St. Josaphat School, grades 2-4, from 1993 –1995. On August 1, 1995 Rev. Dubovici was assigned as Administrator of SS Peter and Paul Ukrainian Catholic Church in Auburn, NY serving there until August 20, 2000. The Auburn Parish had a parochial school, grades K-8. There Fr. Dubovici was involved with the school on a daily basis, teaching, advising and administering.

On August 20th, 2000 Fr. Dubovici was transferred to Saint Basil College Seminary, Stamford, CT where he was assigned as Bursar and Procurator. In November 2000, he was appointed Vice-Econome of the Stamford Eparchy. He also served as an instructor of Liturgics at Saint Basil College Seminary. During the year 2001, Fr. Dubovici was assigned by Most Rev. Basil H Losten to audit the financial books of all parishes in the Diocese, which he has done, on a yearly basis until 2007.

In 2001 Fr. Dubovici was sent to Sacred Heart University where in December 2003 he earned an MBA diploma, with major in accounting.

In June 2005 Most Rev. Basil H Losten elevated him to the rank of Archpriest. From July 1, 2005 besides seminary and diocesan duties he was appointed as Administrator of the Mission Parish in Bedford Hills, which he served until July 30th, 2006.

On August 1st, 2006 he was transferred back to Auburn, NY where he served until July 2009. During this time, he was Bursar for the St. Basil College and Vice Econome for the Eparchy. In June 2007, Rev. Dubovici was elevated to the rank of Very Rev. Mitred Archpriest by Most Rev. Paul Chomnycky.

On August 1, 2009, he was assigned as Administrator of Holy Protection Parish in Bridgeport, CT while holding the positions of Bursar for St. Basil College and Vice-Econome for Stamford Eparchy.

On August 31, 2012 Right Rev. Mitred Archpriest was released from all his duties at Holy Protection Ukrainian Catholic Church, the Ukrainian Catholic Seminary Inc., and Stamford Eparchy in order to serve as Vicar General for the Ukrainian Catholic community in Romania. During his term, a church was built and blessed in August 24, 2014, by Most Rev. Paul Chomnycky and the local Bishop; three churches were blessed, and three priests were ordained, and two parishes were opened. The rectory was also renovated. 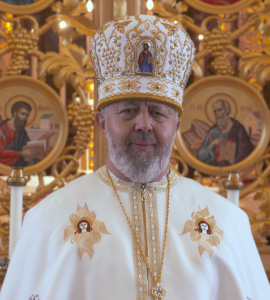